WARNING: Hurtworld is still very early in development. It may be worth waiting until we are further through development before getting on board (We’re not going anywhere).

Hurtworld is a hardcore multiplayer survival FPS with a focus on deep survival progression that doesn’t become trivial once you establish some basic needs. That feeling when you’re freezing to death trying to make a fire, or you’re defenceless being chased by creatures. These experiences are what make a survival game. When you overcome that challenge and find a level of comfort it’s a great feeling, but what do you do next?

Hurtworld tempts you out of your comfort zone with rich resources, better loot and higher tech. It will also throw more dangerous creatures, harsher environments and new challenges at you that can’t be taken on without the proper gear or refined skill. Will you settle for bows and arrows and a campfire, or push deeper into the map and start scavenging for vehicle parts and better weapons?

Built from the ground up with solid multiplayer foundations. Designed for fast skill based PVP and PVE. You will constantly have to decide which is the biggest threat, the player opposite you or the creatures that will hear your gunshot.

All the features above are currently in the game and functional, however much of the content in these systems is placeholder. While we’ve done a lot of the hard work developing robust systems to underpin gameplay mechanics, we haven’t yet spent a lot of time generating and balancing content for these systems. As this is mostly configuration work, we will be able to quickly deliver lots of new content in the coming months.

Most multiplayer open world games use a MMO style network architecture. While this allows for greater player numbers per server, it opens up the game up to endless cheating exploits that are impossible to stomp out. Hurtworld uses an architecture closer to that of a modern FPS, where all physics and game logic are calculated on the server. While cheats can never be fully stopped, this structure makes a large amount of the exploits impossible from day one. Due to this, our servers will use a bit more resources for the same number of people than your usual survival game, but we think it’s totally worth it.

Keeping your FPS high and smooth is crucially important to us. As members of the PC master race we know 60+ FPS is a right, not a privilege. Not to mention PVP gunplay just doesn’t work at low FPS. This is an ongoing battle while we are developing the game, adding new stuff slows things down, doing an optimization pass gives us some breathing room. It goes in cycles.

Currently things are running very well, we did a lot of hard work during our closed alpha to bring performance up and to get rid of big spikes. On mid range 2 year old machines we’re currently getting 80+ FPS on medium settings. Our biggest bottleneck is player skinning on the CPU. Meaning if your CPU is a potato, and there are lots of players in your area, it will chugg. We have a fairly comprehensive graphical settings menu that should let you scale things down even on lower spec machines. We are constantly working to improve performance and we’ll do our best to keep everything running well throughout early access.

Hurtworld has competitive FPS in its DNA. Violence isn’t the only option, but when it’s needed you want to be sure it’s a fair skill rewarding system. We are keeping the gear cap low on PVP items. This means a player with 150 hours in a server and endgame loot can’t faceroll their way around the map with impunity. Higher grade gear will allow you to survive in harsher environments and take on fiercer creatures, it won’t however stop a bullet to the face.

We are currently testing a new system that changes the way gear is dropped on death. By default all gear you have equipped like tools guns and clothes won’t drop on death.

Secured gear in your hotbar and equipment slots (gear you are wearing) can only be dropped if your infamy level is above zero.

Infamy is a stat bar that increases by one every time you kill someone, and slowly decreases over time back to zero. For each point of infamy you currently have, you have a chance to lose a secured item (equipped gear / weapons / tools).

We hope this will have a few effects.

As with any new gameplay system, it sounds great in theory to us, how it plays will be the real test. This behavior is currently enabled by default, however server owners can override playerlootmode to 4 different settings depending on preference including the classic lose everything.

Modding is one of our top priorities. We have been working with the awesome guys at Oxide, to integrate their modding framework with Hurtworld. You can download their API right now and start writing server mods for Hurtworld in Lua, C#, Javascript or Python!

In the future we want to build Hurtworld into a platform for different sandbox game types (Think Dota 2 custom games). We are designing the game we want to play most, however the framework of player movement, gear, combat, environmental effects, AI, vehicles, construction and gathering can all be applied to vastly different game modes with very little work. We are slowly building up a more powerful SDK we plan to release sometime in 2016. I can’t wait to see what other people do with a solid FPS framework with the backing of a fleshed out survival game.

How To play HurtWorld ONLINE

1. Download the Online Crack
2. Download Steam HERE then install it on your computer.
3. Create a Steam account HERE after that login with your Steam account with the application you just installed.
4. Extract the crack, copy everything inside, I said EVERYTHING even the internet shortcut REVOLT and now paste in the root folder of the game, make sure the steam is open, now it’s just start the game with the main .exe of the game.
IMPORTANT: To play with your friends it is necessary that you invite him via steam chat, you will need to minimize the game and open the chat and find your friend, click on ” Invite to play “. 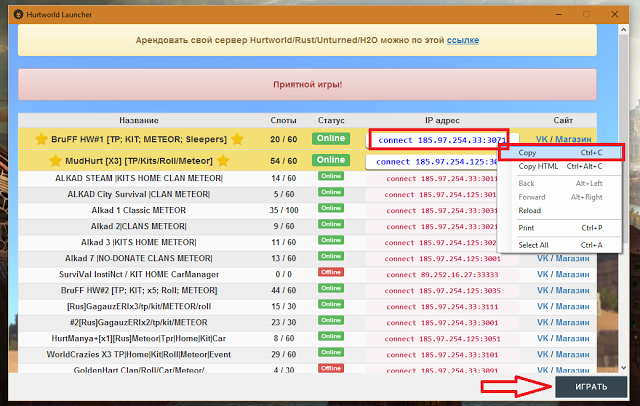 2. Copy any server from among servers
3. Press the bottom button 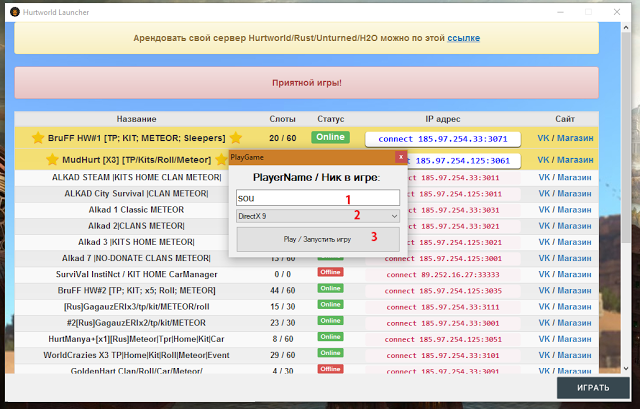 4. Enter info and press “Play” button
5. After the game start press F1 from the keyboard, paste the server you have copied